Zuma restaurants opened their first property in New Delhi, India under the brand “Kheer” at the Roseate House, Aerocity. The entrance reception, the large internal columns, and the serving counters were cladded with a geometric pattern, inspired by traditional Indian geometry and motifs. A neutral colored Autumn Brown quartzite from the North Western Region of India was chosen to go with the earthy theme of the restaurant.

Roughly six to seven line drawing patterns were finalized which were then interpreted in two to three versions of dimensionality each to study the play of light and shadows on the pattern. Several prototypes were created to ensure the right blend of deep and comparatively lighter engraving. The corner details of each pattern had to be looked into while finalizing the design.

The manufacturing process was critical and difficult as the quartzite was extremely hard and the CNC milling process required us to develop special diamond tools for the process.

The stone used in this installation was 2” thick and the carving depths were up to 1” deep.

The installation process required backward working for each of the proportions of the panel as the client intended each pattern to finish at the same junction on every corner. This required us to re-engineer every pattern on every column, counter, and the entrance, even if it was by just 5mm.

To achieve variations of the levels on this installation, mechanical installation was used with clamps and fasteners so that the stone slabs could be installed in a staggered manner. 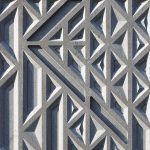 To fix an online consultation or virtual walkthrough of our showroom
Call: (877) 862-6662
Email: info@anomastone.com

Tell us about your project